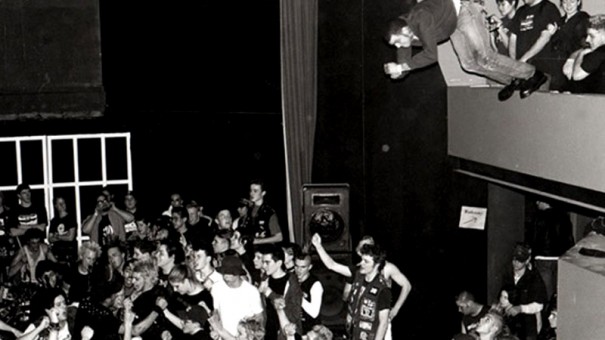 Every major cultural movement has a place that feeds and incubates its development. A location is central to the movement, it is where the ideas and identity reinforced and shared.

The 60’s counter culture movement had the Haight-Ashbury, the beatniks of the 50’s had Greenwich Village, and our movement had a very special place down in the bowels of Tijuana Mexico.We were young and obsessed with surfing, skateboarding, punk rock, hot rods, motorcycles, art, design, and rebellion. Only one place in our world allowed us the absolute total freedom that the 12,000 square foot club known as Iguanas did. For those of us in our circle the place had a huge impact on our lives. I would have to argue, based on the level of success we’ve all achieved 20 + years later in the Creative Fields of advertising, design, marketing, photography and writing, Iguanas was, in fact, a very positive influence.A mind-blowing line up of bands played there in the early 90’s before the club fell. The lineup is the ultimate list of bands from that time.Bad Brains, The Damned, Sonic Youth, Bad Religion, NIN, Green Day, Suicidal Tendencies, the Red Hot Chili Peppers, Nirvana, Hole, Jane’s Addiction and more made up the Iguanas legacy.The club was like a Mad Max inspired post-apocalyptic gladiatorial coliseum. It featured three levels of absolute mayhem. The pit would become so intense and frenzied it would take on a life of it’s own. In effect, transforming into it’s own breathing, seething organism that seemed to gobble up the scores of drunken punkers who flung themselves straight into it’s mouth from the third story balcony. In many cases watching shows there became secondary to surviving them. The venue’s legacy will not be forgotten. Thanks for the memories Iguanas!